A networking group celebrated its first birthday – and pledged it would be the first of many.

Instead of their normal speed networking session, members of the HD8 Network took part in “musical chairs” networking and also enjoyed a game of Pin the Business Card on the Donkey – Jonathan Hill, of Pierrepont, winning a bottle of champagne. 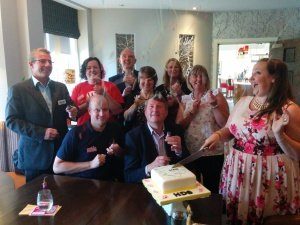 The network – which aims to bring together businesses in the HD8 postcode area – started on Facebook, Twitter and Linkedin last year with networking events beginning a few months later following numerous requests to network face-to-face.

Merewyn Sayers, creator of the HD8 Network, said: “Even though promotion is a key to the members of the HD8 Network, it is not the only aim. We are more than that. We are a community of local businesses who meet to discuss our businesses, supporting each other and the HD8 area. I’m thrilled we’ve reached this one-year milestone and I look forward to holding many more anniversary events.”

The HD8 Network has also launched its new website – www.HD8network.co.uk – with a business directory and events section where organisations can submit their details to the website. The network also posts this information on its social media profiles.